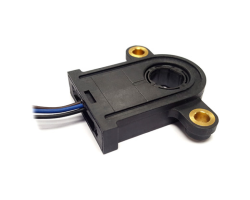 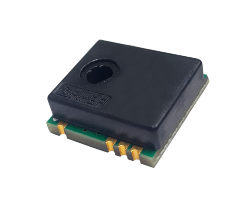 Key features include through hole sensing where the shaft passes directly through the sensor, high accuracy absolute position feedback over 360°, and a true non-contacting sensing element. The new sensor incorporates a proprietary ring magnet with hall chip for the sensor element.  This combination does not rely on gears or other rotating parts, maximizing robustness and sensing accuracy.  The proprietary design provides a streamlined sensor with only one moving part along with electronics designed for harsh environments.  Unlike optical encoders it has no sensitivity to dust or dirt and can tolerant high vibration cycles as the ring magnet never comes into contact with the sensing electronics.  The result is a cost-effective product in an extremely small package.

Measuring just 9.8mm thick with a body diameter of 37mm and 50.0mm mounting hole spacing, engineers can now integrate a fully featured rotary sensor directly on their existing shafts without the packaging issues that typically accompany encoders or other through shaft sensing devices.  The exceptionally low profile fits easily in places that were previously too narrow for pre-packaged rotary sensors.  The standard models features 14mm or 17mm diameter double flatted shaft design.  Custom rotor configurations are available from PIHER to adapt existing OEM shafts to the standard PST-360 Sensor.

The MTS-360 provides a true breakthrough in contactless sensor technology by combining a through-shaft design with 360º absolute position feedback in an ultra miniature size.  The result is the smallest fully featured rotary sensor on the market with reliability up to 50 million cycles.

With its tiny size of only 6mm x 17mm x 18mm (HxWxL), engineers can now integrate a fully featured rotary sensor directly on their PCB without the packaging issues that typically accompany encoders or other absolute position devices. The exceptionally low profile fits easily in places that were previously too small for pre-packaged rotary sensors.

The new device offers electrical angles up to 360° with no dead band and linearity as low as ±0.5%.  Rated for use at -40ºC to +125ºC, the sensor can be programmed with full scale output with angles shorter than 360 degrees.  Output is selectable between Analog, PWM up to 12 bits or Serial Protocol (SPI) up to 14 bits and includes a second output channel to provide a programmable switch signal.  A redundant version with a dual core sensor in the same package is also available.