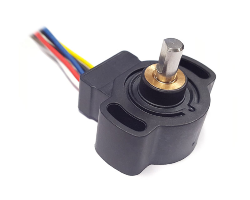 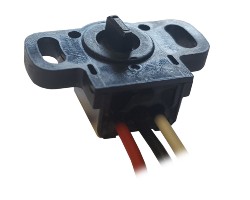 This programmable Hall effect sensor combines key features not found in other 360° absolute position sensors, including a switch function. This allows for substantial cost savings in a common package that are critical in safety and high reliability applications.  Additionally, the PSC-360-IC also offers best in class temperature performance (operating between -40° to +125° C) and accuracy over 360° up to 0.5%.  The device offers a programmable linear transfer characteristic capable of multiple positive and one negative slope.

These low profile sensors from Piher are truly non-contacting with a permanent magnet that is securely fastened to the shaft and act as the only moving component in the sensor.  The technology itself is insensitive to variations in the magnets properties as well as axial and radial misalignment between the drive shaft and the control electronics. This means significantly improved reliability over temperature and time when compared to other available solutions.  Inside, the sensors electronics (sensing system) is precisely positioned near this magnet and is sealed for harsh environments.

These features are ideally suited to extreme environment exposure where shock, vibration and dust are unavoidable.  Further, Piher’s technology is not only true absolute, maintaining its position even after a power interruption, but it also offers full redundancy achieved with a dual core version within the same housing(s).  The result is a highly configurable sensor that is completely sealed with a life expectancy of 50 million cycles that provides an ideal solution for the harsh environments found in industrial, agriculture and off-highway applications.

Piher’s non-contacting sensors are highly configurable and include:
• Absolute Position over 360°
• Programmable angular ranges up to 360 Degrees with no dead zone
• Life: up to 50M cycles
• Dual redundancy available
• Standard Outputs: Analog and PWM (both 12 bit) and Serial at 14 bit
• Up to 0.5% linearity
• Highest Temperature Rating at 125° C (others upon request)
• Custom shafts and connectors
• Switch function with programmable position

Piher´s sensors are used in harsh environments and can be custom tailored for use on Tier One and OEM platforms.

Despite its lightweight and miniature size of only 21mm, this hall-IC angle sensor delivers high performance with up to 360º electrical angle (without dead zone), 12bit resolution, extended life and EMI & ESD protection.

The MSC-360 can easily be tailored to customers’ needs providing value at the lowest cost even for the most demanding environments.