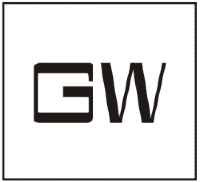 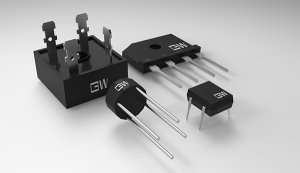 A diode bridge is an arrangement of four diodes in a bridge circuit configuration that provides the same polarity of output for either polarity of input.

When used in its most common application, for conversion of an alternating-current (AC) input into a direct-current (DC) output, it is known as a bridge rectifier. A bridge rectifier provides full-wave rectification from a two-wire AC input, resulting in lower cost and weight as compared to a rectifier with a 3-wire input from a transformer with a center-tapped secondary winding.

The essential feature of a diode bridge is that the polarity of the output is the same regardless of the polarity at the input.  The diode bridge circuit was invented by Polish electro technician Karol Pollak and patented in December 1895 in Great Britain and in January 1896 in Germany.  In 1897, the German physicist Leo Graetz independently invented and published a similar circuit.  Today the circuit is sometimes referred to as a Graetz circuit or Graetz bridge.

Prior to the availability of integrated circuits, a bridge rectifier was constructed from “discrete components”, i.e., separate diodes.  Since about 1950, a single four-terminal component containing the four diodes connected in a bridge configuration became a standard commercial component and is now available with various voltage and current ratings.